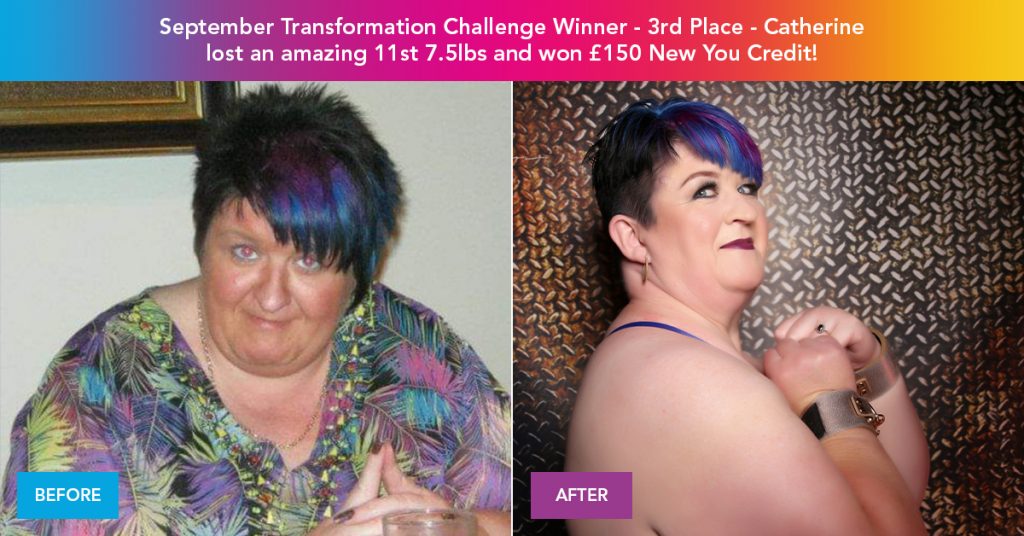 To celebrate her win we thought we would tell you her story and enjoy a bit of inspiration and motivation.

Catherine had booked a special 50th birthday holiday to Iceland and New York. However, she didn’t want to face the embarrassment of getting on the plane and having to ask for a seatbelt extension. She started to dread the thought of how uncomfortable she would be on that nine-hour flight.

Motivated with her why in the bag she trawled the internet for ways to lose weight so she could enjoy every aspect of her 50th treat.

During her search for low-calorie diets, New You popped up and she thought “why not, after all, I’ve got nothing to lose.”

Catherine’s first New You order came on 6th August 2020 and she went ahead and recorded her weight and measurements so she could track her progress.

Catherine noted that she was wearing trousers size 30/32 and tops between 28 – 32 depending on the style. Her hips measured 69 inches and at 5ft 6 inches tall her hips were actually 3 inches more than her height. She admits that she was morbidly obese.

In her first week of the New You Total Plan, Catherine lost a staggering 15.2lbs. She was so blown away that she got on and off the scales six times just to make sure that she was reading the scales correctly!

Catherine’s determination and drive meant that by the time it came to catch a flight she had lost so much weight that she only needed an extension seat belt for a matter of 1/2 an inch!

At around the same time that Catherine entered her first Transformation Challenge, she found the confidence to enter a competition that won her a “50 shades of grey themed photoshoot”. Previously she would never have entertained even posting her pictures on the Secret Slimmer’s Facebook page, let alone having a professional photoshoot. She loved every minute of it and thanks her weight loss for helping her to feel free in doing new things such as this.

After committing to her transformation for thirteen months, Catherine has now lost an amazing 11 stone 5lbs. She now wears a size 18 top with slightly bigger bottoms and her hips having shrunk are now measuring 53 inches.

When Catherine told us about her journey, she admitted that she is only just over halfway through her journey, but doesn’t intend to stop until she no longer needs that additional extension belt and has to do it up tighter than tight!

Catherine only had one last thing to say, and that was, “Thank you, New You for giving a new me and here’s to me departing with more of the weight!”

Catherine has achieved so much over the last year or so, with both scale and non-scale victories. She still clearly has the same passion and determination as she did at the start to change her life forever and achieve her transformation goal.

To put it into perspective, Catherine has successfully lost a whole other person in body weight and found a new more confident version of herself that is not only healthier but is experiencing things she never would have done before.

If you want to enter our Transformation Challenge, it’s super easy, just head on over to dedicated blog for all the details.

Make yourself your top priority and start changing your life with New You today!