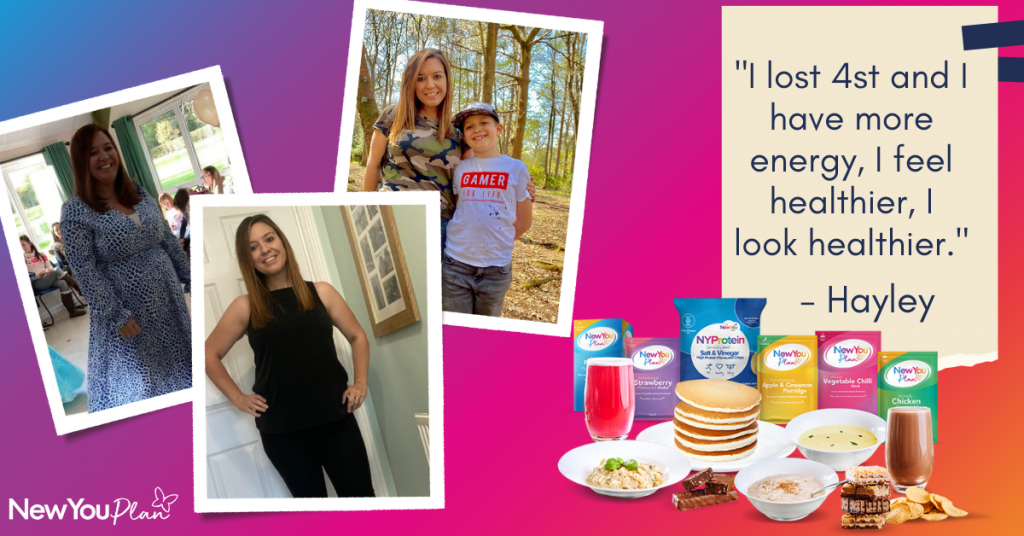 Hayley Didn’t Know There Was a Better Way of Life Until She Experienced The New You Plan.

Hayley had come to terms with her curvy figure, believing that this was it and that she didn’t need a better way of life.

She thought she was truly happy with her lot until a child commented that she was fat. This got her thinking about the effect this would have on her children and wondered if there was a better way of life. At around the same time, her husband was considering losing a few pounds. He suggested that they both try a meal replacement diet, as recommended by a colleague, and the rest, as they say, is history!

NY: How did you first find out about the New You Plan?

HAYLEY: It was my husband’s idea. There was some guy at work. There’s always a story isn’t there of someone at work, who lost loads of weight doing some sort of meal replacement diet. So my husband suggested we should try this sort of thing. We did some research, and the new you plan really shone out to me. It was largely because it’s so competitively priced, and there were no monthly fees. I think a lot of people have meal replacement diets you pay to see a consultant. That didn’t seem to be something that New You had, so that really ticked our box. I was won over by the effectively priced deals, like a box of food for six weeks bundle. It was super!

NY: That’s fantastic. So your husband started the Plan with you?

HAYLEY: Yes, it was his idea. Maybe I’m a little bit different to most slimmers? I was perfectly alright, or so I thought. With being in my late 30s, having had two kids and going through lockdown, I thought this is what it is. I sort of got to that point of just being so this is what I look like then and maybe to a certain extent, perhaps in a bit of denial about how big I’d got and sort of accepted that. That was my lot in life. It was only when my husband suggested we give it a go, that pushed me into it.

NY: Was your husband successful as well?

HAYLEY: Yes! We both started a little bit before Christmas and again in the New Year. He lost 2 stone. He didn’t have as much to lose as I did. He was pretty chuffed with it. 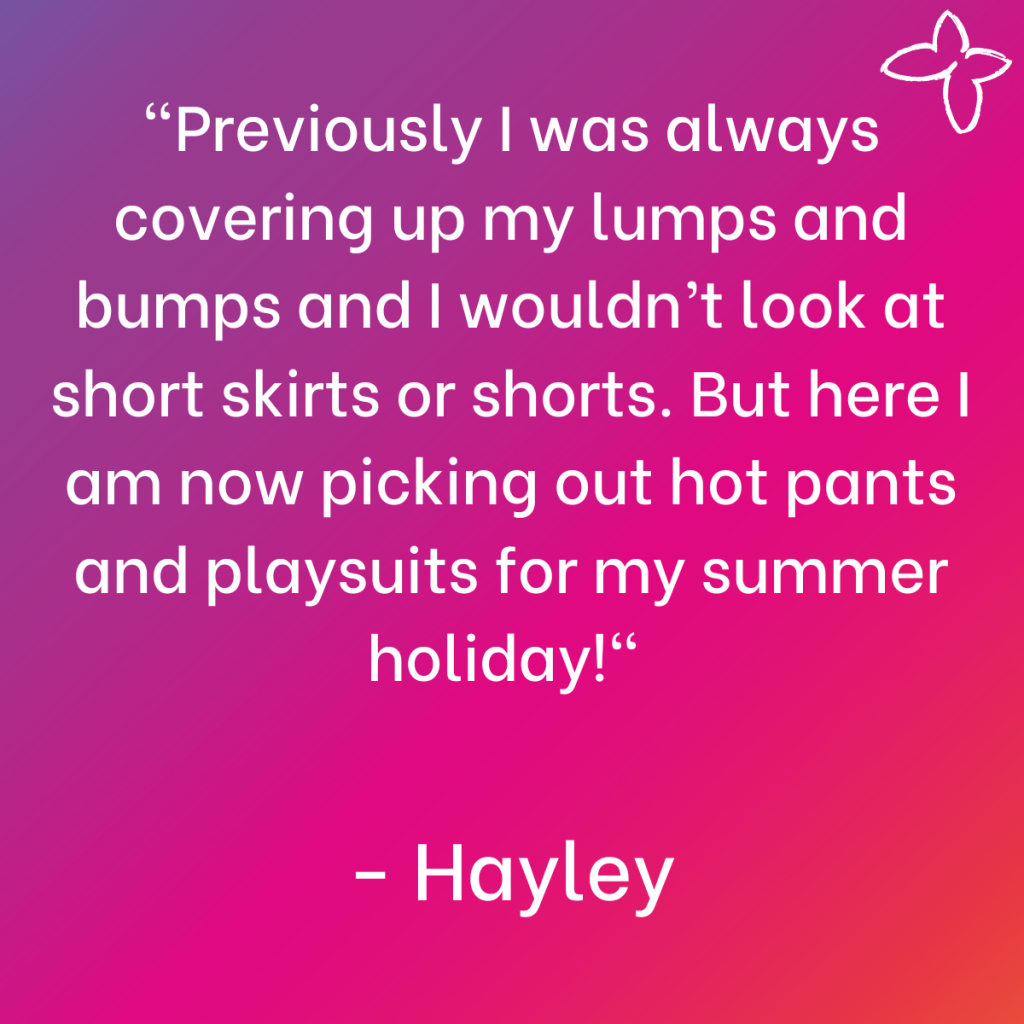 NY: In a previous interview, you mentioned starting the Plan because of your children, can you tell us about that?

HAYLEY: Yeah, my son was playing online video games, like fortnight with his friends from school, and you know they say things to each other which we shouldn’t take to heart but one of his friends said your mums fat. Now, I knew I was a bit curvy but I didn’t think another kid would call me fat. I didn’t want to be an embarrassment to my children. But I thank him now for saying what he did!

Your First Week with New You

NY: Kids can be brutally honest at times! What were your first impressions after placing your order? Were you excited to get started? How did you prepare for going on the Plan?

HAYLEY: I felt really pumped. We started it six weeks before Christmas and then we decided to have Christmas off and reassess in the New Year. That was our plan.

I was excited when our order arrived, as it was wrapped in lovely pink tissue paper. I’m such a sucker for pretty things! It was overwhelming too because it all comes in a big box and looks a lot and I thought I need a labelled storage box right now! It’s a good feeling as well because it’s like right – we’re doing it! So many emotions!

NY: How did you find your first week on the Plan? Were there any hurdles that you faced?

HAYLEY: It was all quite self-explanatory which is good. You’ve got a little book with all the guides and you know how long to put everything in the microwave for. The hurdle came on day 4 for me. Everyone has a different experience with it. But for me, that was the withdrawal from carbohydrate and sugar day. I had a headache that just would not quit. But that’s it really. If you can get past that hump, then it’s generally plain sailing from there. For the people that are reading this, that’s the biggest hurdle to get past. Just don’t give up at that point as it passes. 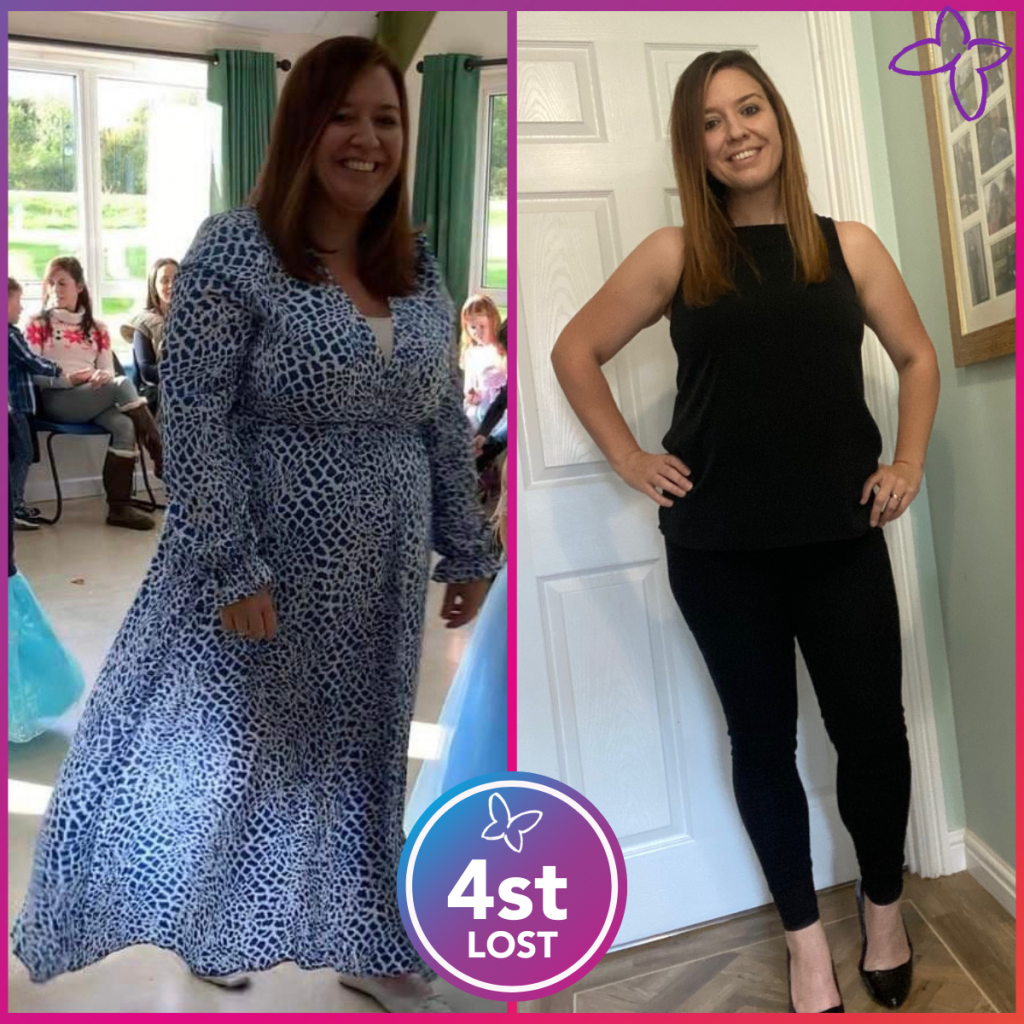 NY: What would be your favourite product or favourite meals that you’ve had on the Plan?

HAYLEY: I’ve got a sweet tooth so the muesli, the chocolate brownies and the salted caramel cake. You see that’s why I put on the weight because I love the cake!  I went through a phase of being obsessed with the mushroom soup too. The salt and vinegar crisps are phenomenal though, being the right level of salty and vinegary!

NY: What would you say would be your biggest non-scale victories?

HAYLEY: I think it’s having to buy pretty much, a whole new wardrobe. As problems go that’s quite a nice problem to have, isn’t it?  Because all your clothes are too big!  It’s nice to go into a shop and pick up a size 10 and know it’s gonna fit me. It’s just lovely. You know, as somebody who’s been overweight pretty much all my life, size 10 was never an option for me. Previously I was always covering up my lumps and bumps and I wouldn’t look at short skirts or shorts. But here I am now picking out hot pants and playsuits for my summer holiday!

NY: How exciting! Are you at your goal weight yet?

HAYLEY: I’ve got one stone to go. I’m 4 stone down and I’d like to lose 5. So I’m trying to lose this last stone by eating healthy and exercising more. I’ve got until the 10th of August to do it as that’s when my holiday is. 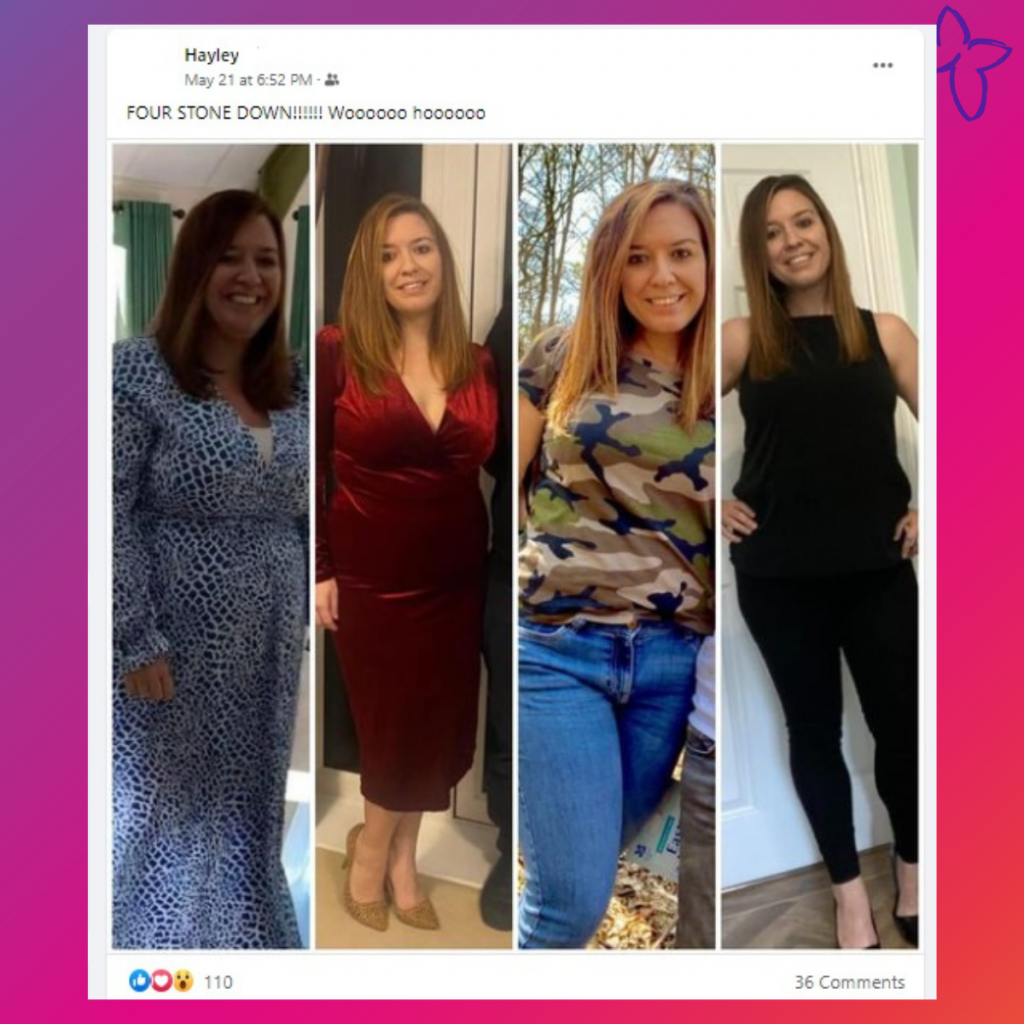 NY: So going forwards, is it your plan to keep eating healthily? If so, has the Plan changed your thoughts about food?

HAYLEY: Yeah eating healthily from now on is definitely the plan, and New You has helped me get to that point, for sure. The big thing is that I didn’t realise quite how much I ate. I think I grazed a lot. You know you don’t realise especially if you’re watching TV and you eat a couple of digestive biscuits with a cup of tea but it’s not actually a couple, it’s probably seven!

Those are the things that you just don’t quite account for, and portion size. The museli is such a good example because that’s probably about the right amount of cereal. I was having about four times that in my bowl of cereal before I started the New You Plan. So I think that really helped me, especially going forward because I liked knowing what I was going to have. It’s really instilled planning into me. I now plan to eat healthily with the family. I’ve got some cookbooks that are for lower-calorie meals and I’ve got a slow cooker so I can prepare meals in advance. New You has taught me to be more organised and more aware of the food I’m eating and the value I’m getting out of.

NY: What is the nicest compliment you’ve had since achieving your weight loss.

HAYLEY: My neighbour said the other day that I looked 15 years younger. I absolutely loved that! In general, it’s just the look on people’s faces, especially when you haven’t seen them for a while and they say you look great. Now I think I carry myself better, as I’ve got more confidence.

NY: What advice would you give to anyone who’s thinking of starting the New You Plan or has just started?

HAYLEY: Join the Secret Slimmers Facebook group. It’s so helpful with all the things that people post on it. They’re asking all those little questions that you want to ask yourself! People put these mad recipe ideas together where they’ve mixed packets together for if you’re getting a bit bored. It’s so useful and supportive. I said at the start that I didn’t need a consultant, and I found out that the Secret Slimmers community is exactly what you need. Those people are doing the Plan too. They’re going through the exact same thing that you’re going through. They celebrate success stories and what they’ve lost so far, and that’s something I’ve really enjoyed.

Having lost 4 stone, Hayley now lives a life she never even considered. Her confidence has improved, she feels proud and can now grab a size 10 and know it will fit!

New You has shown Hayley a different way of approaching her eating habits and she has taken it on board and run with it. Although she still has a stone to go, we think you’ll agree that Hayley and her husband have adopted a new way of life and have successfully changed their health and lives for the better.

If you are considering trying the New You Plan, take a look at our website or download our app. There are lots of inspirational stories just like Hayleys and a range of delicious meals and snacks for you to choose from.